Inspired by the kiosks at South Korea, the Ambikapur (Chhattisgarh) kiosk has two openings in front along with a hand glove attached to it, thereby eliminating the need for any medical personnel to physically come in contact with anyone.

Taking their coronavirus fight one step ahead, Chhattisgarh has now installed one walk-in sample kiosk (WISK) developed by the Medical College in Ernakulam to collect throat swabs of patients and suspects.

Soon CIMS Bilaspur would have the walk-in sample kiosk set up. 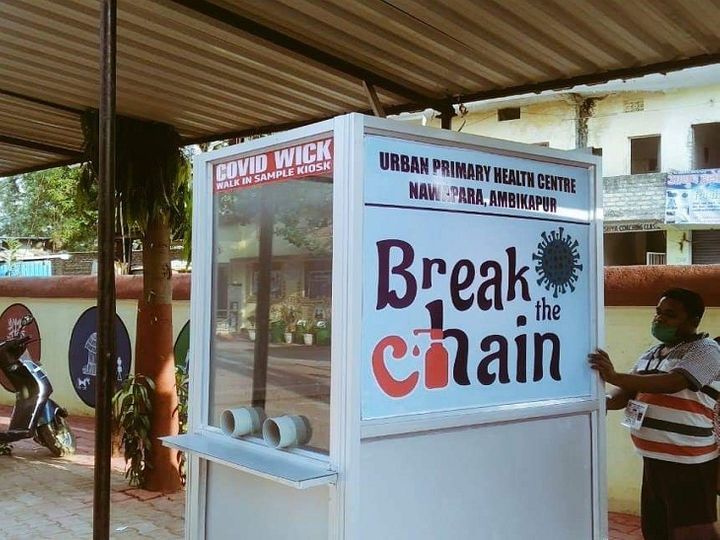 Inspired by the kiosks in South Korea, the Chhattisgarh kiosk has two openings in front along with a hand glove attached to it. The staff can stand inside the kiosk and collect the throat swabs without exposing themselves to the person under observation. The exposed part of the glove will be sanitised after each use.

Samples are usually collected in designated hospitals under a controlled environment and patients and suspected persons are brought in an ambulance.

Chhattisgarh Health minister T S. Singhdeo  said, “WISK helps reduce the consumption of PPE as health workers can safely collect the samples from inside this. This will also be helpful for mass screenings.”

If a large number of people from a particular area have to be screened, a WISK can be easily set up in that locality and it will ensure faster and simple collection of samples, the MINISTER added.

The health department adopted the model from South Korea where it has been used widely and the new kiosk hopes to take care of the shortage of PPE concerns.